Shortly after the peak of the Perseid Meteor Shower, in the constellation Delphinus, not far from Sagitta, a naked-eye nova appeared. While not overly bright (it only got to maybe +4.2 mv?), it was bright enough to be seen with the naked eye (which is fairly rare, all things considered), and readily visible in binoculars. However, it is also set against the backdrop of the edge of the Milky Way, so easily lost amongst all the other stars. On the night of August 16th I set up my DSLR camera mounted with an 80-400mm lens, and despite the light of gibbous moon, managed to locate Sagitta quite readily. Knowing that the nova was approximately one Sagitta length away, and in the general direction that Sagitta is pointing, I repositioned the camera to aim at that spot, keeping Gamma Sagittae in the field of view, and snapped some images.

The attached document shows finder charts for the nova as well as one of the images I shot. As you page through the document, the nova will be identified, as will some of the surrounding stars, which can be then cross-checked against the finder charts.

Enjoy this little view of celestial history. While the star is beginning to fade once again, it should still be in easy binocular reach for another month, and should be picked up in long-duration exposures taken with camera fairly readily.

The following two photos of Jupiter and four photos of the Moon were taken from the sidewalk in front of my house in Crofton, MD. I used my Celestron 130 SLT, a 2X Barlow (except for one of the moon photos), a MacBook Pro (courtesy of APL) and the club’s new Orion StarShoot Solar System Color Imaging Camera IV to take these photos. The hardest part of acquiring the images was focusing, since the image bounces all over the place when you touch the focuser (or any part of the telescope, really). Adjusting the gamma level before recording was also critical for the shots of Jupiter. I used the WebCam Monitor software that came with the camera to capture movies and stills. I used the open source Lynkeos software (which also came with the camera) to stack the movie frames into a single image. The whole process was a little frustrating at first. A little patience yielded some reasonable results. Here they are.

Here is a quick and dirty time-lapse movie of Comet PanSTARRS over the course of three evenings (March 12, 14, and 19). Details varied on exposures and lens from 1-2 seconds, 210-400mm, ISOs from 400-3200. If you look closely, you’ll notice that the angle of the comet tail changes over the course of these short clips. 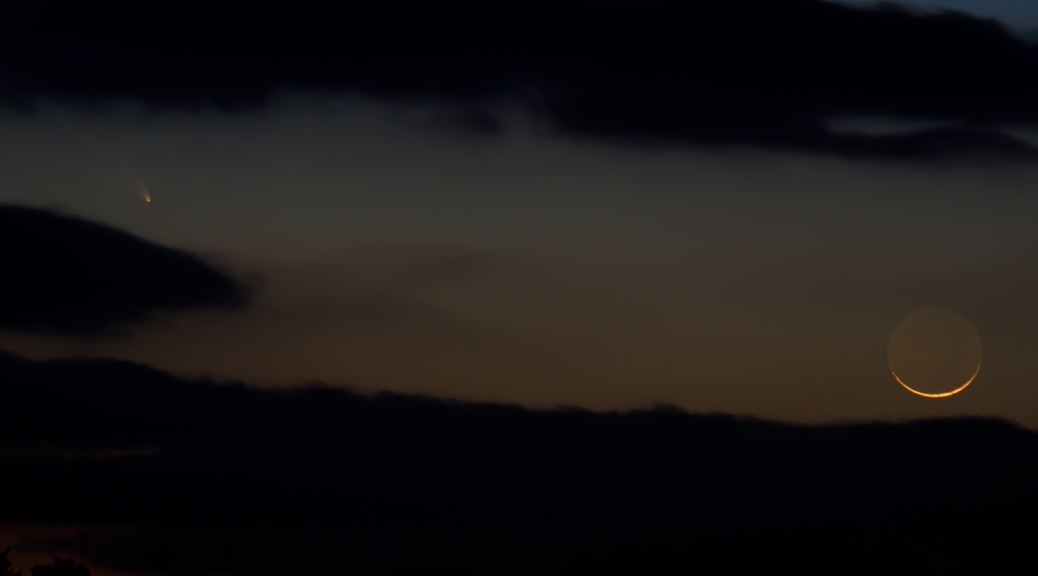 Last week during the first opportunity for us to even see C/2011 L4 PanSTARRS, the barely 1-day old crescent moon was a few degrees away. I managed to do a very very short time-lapse of the two together as the clouds streamed by. Here is a still from that sequence of images.

We should have one big observing report at the next meeting.  Thanks to Helen for her faith and perseverance to have the transit party.  I thought it was a big success.

This past weekend I was out at Seneca Rocks, West Virginia

. We had awesomely clear skies Saturday night (and the temps dropped to right about 20 F by morning – brrrr!), but I managed to get two time lapse sequences shot (unfortunately not with the dolly; forgot the power cord that connected the battery with the controller

). However, I managed to catch at least two meteors (that I’ve seen in my photos so far, anyway), one a sporadic, one an Orionid. The photo here (click to enlarge) has the Orionid in it, right at the horizon on the left side. In the foreground relative to the meteor is an orangish glow of a cliff face, which is Seneca Rocks itself. (for scale, it is about 300′ high, and I am more than a mile, mile and a half away) 25 second exposure, f/3.8, 21mm lens, 3200 ISO. The Praesepe (aka, Beehive Cluster, M44)) is the cluster of stars just above the middle tree, the bright star just right of center is Procyon, the very bright star far right is Sirius. Saturn is the brightish star up and slightly right from the meteor trail.